Monday’s total solar eclipse was one of the biggest astronomical events of the year, but people that missed it will have the chance to see another in less than a decade.

On April 8, 2024, the shadow of the moon will once again completely block out the sun across the United States, this time from Texas to Maine. Portions of Mexico and eastern Canada will also experience a total solar eclipse. This will provide a second opportunity for people in the U.S. to experience one of nature’s most beautiful displays. 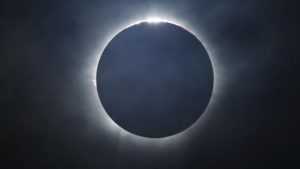 Many major cities will be in the path of the 2024 total solar eclipse, including Dallas; Little Rock, Arkansas; Indianapolis; Cleveland; Buffalo, New York; and Montreal.

Similar to this week’s eclipse, much of the rest of North America will experience a partial solar eclipse on April 8, 2024, with the exception of Alaska and far northwestern Canada.

While the next total solar eclipse in the U.S. will not occur until 2024, it will be preceded by an annular solar eclipse just a few months prior.

During an annular solar eclipse, the moon is farther away from the Earth, so it is not quite large enough to block out all of the light from the sun. Because of this, this type of eclipse has been given the nickname of the ‘Ring of Fire’ eclipse.

This Ring of Fire eclipse will occur on Oct. 14, 2023, and will be visible from California to Texas and across portions of Central America and South America.

An annular solar eclipse is seen in the sky over Yokohama near Tokyo Monday, May 21, 2012. The annular solar eclipse, in which the moon passes in front of the sun leaving only a golden ring around its edges, was visible to wide areas across the continent Monday morning. (AP Photo/Koji Sasahara)

People from coast to coast have often called 2017’s eclipse the ‘Great American Eclipse,’ but this name might also be adopted for a solar eclipse later this century.

On Aug. 12, 2045, the shadow of the moon will once again track across the United States, this time from Northern California to Florida.

Some may argue that this eclipse will be more impressive than 2017’s as the moon will completely block out the sun for over 6 minutes, more than twice as long as this week’s eclipse.

This will also be the longest total solar eclipse experienced anywhere in the world until 2114.